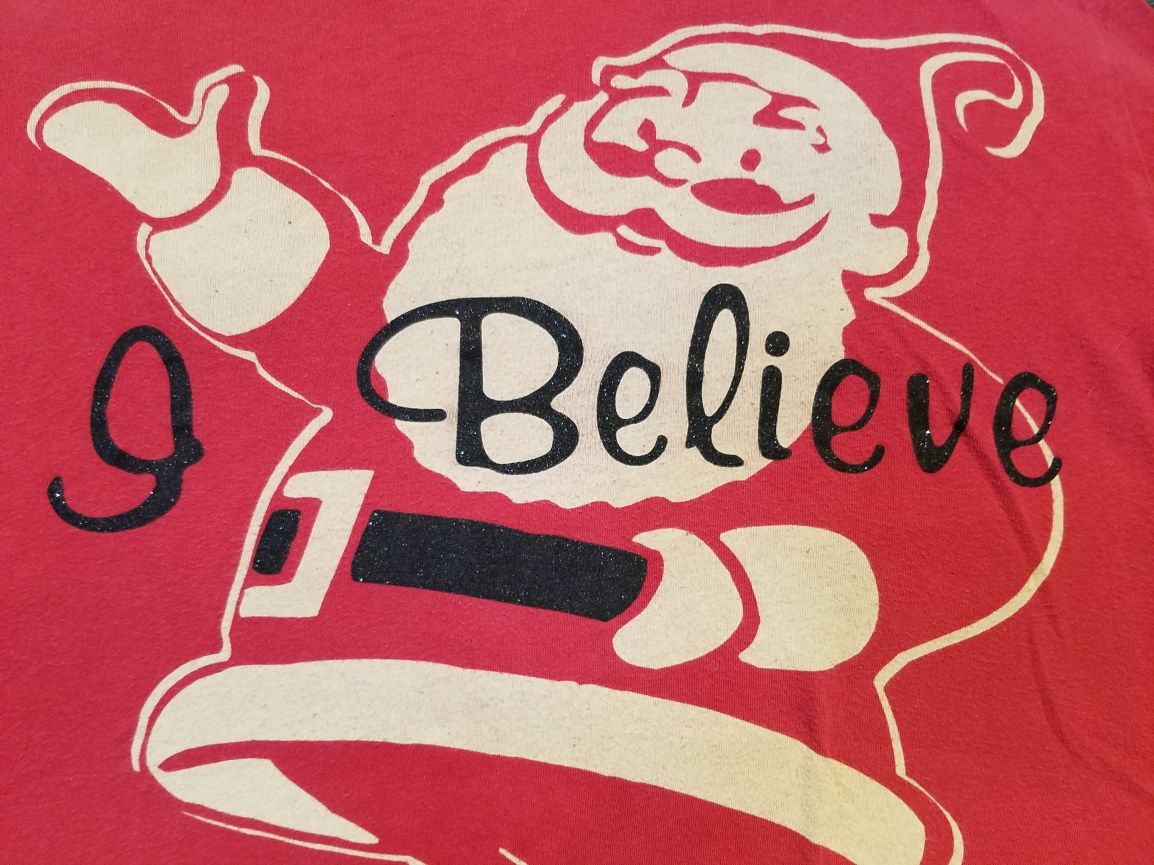 The picture above is from a shirt I was wearing the day I was asked the funniest question of my life.

Maybe it’s one of those stories that won’t come across as well in writing, but it happened nearly a decade ago, and I’m still giggling about it.

My daughter was approaching her first birthday, and I was at one of those wonderful new-mommy-playdates. Everyone there is in the same boat, about to experience our first holiday season with a child, and we sat for hours talking about the type of stuff you can only talk about at that stage in your life.

Out of the blue, one of the moms asked the group:

“So, what are you going to do about the Santa thing?”

There was a pause.

While everyone else was probably seriously considering her question, I pointed at my shirt and deadpanned:

The other moms laughed at my response, (and probably with relief that they didn’t have to seriously come up with an appropriate answer).

What am I going to do about The Santa Thing?

You may wonder why I’m tell this particular story in a blog about environmental communications.

To me, that question has a lot of meaning, much deeper than the magical kid-at-Christmas-meaning (which, by the way, is an actual expression people use to explain what joy and excitement feel like, if you recall…).

To allow our children to believe in Santa is to teach them to dwell in that wonderful intersection of imagination, belief, and magic.

Now, don’t get me wrong…

I’m not telling you that the issues we care about in environmental communications are like believing in Santa.

I am saying that there is something in that belief that we can learn from.

In case you haven’t noticed, a lot of people have their heads in the sand about the state of the environment.

How can we teach them to believe?

Why is it that a child can so easily believe in magic, but an adult has such trouble believing in science?

A lot of your readers will have less experience with climate change than they will have with Santa.

A lot of your skeptics will believe that Santa’s existence might be more believable than the environmental issue you care about.

At this time of year, there’s a lot of mad scrambling for year-end donations, to make our quotas so we can give the board a favorable report on the past year.

In the midst of all that, try and remember the feelings you had as a kid, the feeling there was something bigger than yourself out there, with the ability to make at least one morning out of the year achieve your wildest dreams.

If you look hard enough at the image above, you can see the wrinkles from where the shirt had been folded in the bottom of my closet for the last year.

Maybe there’s a reason I only wear this shirt at this time of year.

Maybe this is the only time of year we can conjure up that feeling we had as children… the feeling that if we hope hard enough, if we behave and believe, our wishes really will come true.

But what if we brought that feeling into our lives throughout the year?

What if you brought that feeling into your work throughout the year?

What if the way we communicated with each other about important environmental issues also held a bit of hope, a bit of belief, and a bit of extra understanding?

Santa risks a lot to get his presents to children around the world. This year, think about the risks you’re willing to take in your efforts to reach a larger audience.

Use some of Santa’s ingenuity to find ways to reconnect with those who may have stopped believing in you long ago.

environmental copywriter, green business fanatic, scientific translator, and your key to saving the world... View all posts by Danielle Vick

Signing up for this newsletter will save the world… and you’ll also get a free report on The Top 3 Environmental Communication Techniques Today.